Four American lenders ranked in the top five private banks in terms of AUM per RM.

Unsurprisingly, Goldman Sachs Private Wealth Management topped the table with US$769.2 million of AUM per RM. The American lender banks UHNW clients with US$100 million or more in investable assets. UHNW clients are also known to bank with fewer RMs and therefore RMs are more likely to have bigger books.

It was also unsurprising to see Hang Seng Private Bank edging its way into the top five, given the scalability of the bank’s client base, which largely consists of local investors.

Meanwhile, despite a year of heavy hiring, underscored by the hiring of Vivian Chan last year, Standard Chartered Private Bank was ranked 20th with US$132 million of AUM per RM. 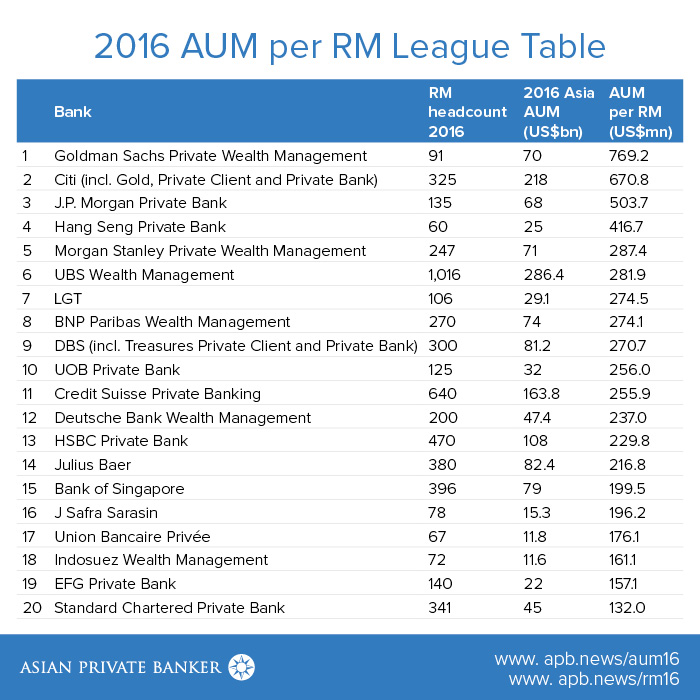 While it is tempting to use the AUM per RM data as a barometer for the efficiency and productivity of private banks’ RMs, industry experts caution against this, noting that it is a crude measure at best, and a number of other factors must be accounted for first.

“The AUM per RM data does not reflect varying RM seniority, minimum client AUM threshold, digital capabilities made available to the RM, team-based approaches that involve direct-access client desks for some and investment advisors for others, and the size of the institution itself,” one private banking consultant said on the basis of anonymity.

Another consultant adds that for a more holistic view on productivity and efficiency per banker, data on the average tenure and years of experience of each RM also need to be gathered to “understand why some banks are able to achieve such high AUM per RM”.

“Throw in profitability data and you will also get a picture of whether these banks with high AUM/RM are profitable,” the consultant said.