Robotics are no longer the preserve of science fiction. Their science has marched into the arena of investment opportunity as spectacular advances in robotics and automation saw the sector soar in value in 2017.

From robots on factory production lines to driverless vehicles and robotic surgery, rapid advancement in the field of robotics means that today, robots are capable of performing highly sophisticated, delicate work, as well as working alongside humans to boost productivity.

Accordingly, there is a sharp rise in the global robotics market, which is expected to grow by 10-15% a year until 2025, according to projections by the International Federation of Robotics (IFR).1

AXA Investment Managers (AXA IM) has successfully tapped into important trends around the rise of robotics with the launch of its global Robotech strategy, which focuses on three key applications of the technology across industrial automation, transportation, and healthcare.

The strategy, which has been in operation since 2015 with AUM circa US$4bn as of December 2017, also invests in the enablers of these technologies – software, semiconductors, and the Internet of Things.

Tom Riley, lead manager of the strategy, describes robotics as a major multi-decade theme, adding: “It is already an investable area from which we aim to select 40 to 60 fast-growth companies to build a global portfolio, diversified across market cap and sectors,” he says.

“We are at the early stages of the robot revolution. Robotics will continue to have a significant impact on society for years to come and an increasing number of new, listed small and mid-cap companies will become investment opportunities over time.”

Asian automation
In the Asia region, the robotics sector is going from strength to strength, with China, South Korea, and Japan, together with the US and Germany, making up the five major markets globally. China alone sold 87,000 industrial robots in 2016 – nearly as many as Europe and the Americas combined.

In its 2017 report, the IFR describes the potential for robot installations in general industry as “tremendous” and predicts continued growth in the automotive industry in particular, both in emerging and traditional markets.

Moreover, by 2025, the market for industrial robots is projected to rise to US$33.8 billion compared to just US$12.3 billion in 2016, according to venture capital firm Loup Ventures.

The potential for considerable growth in the application of industrial robots in Asia is particularly acute. In China, robot density, or the number of robots compared to workers, has doubled to 49 per 10,000 workers since 2013.

China’s robot density is still a long way behind Germany’s 301, Japan’s 305, and South Korea’s 531, giving it considerable room for growth. China is projected by Teradyne, a global leader in automation equipment, to be the fastest-growing market for robot sales between now and 2020. 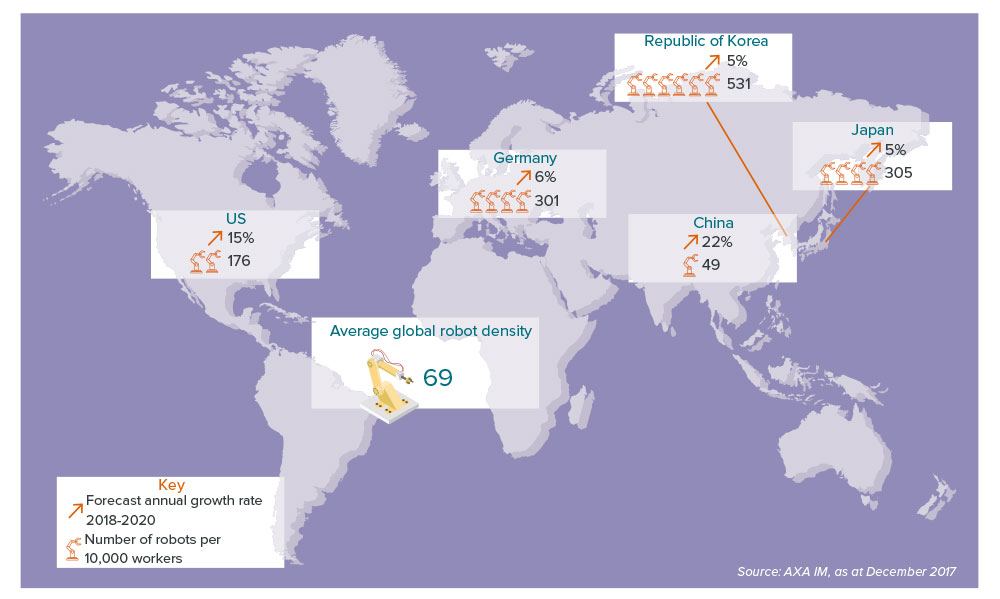 From robots to co-bots
The rise of the robots is driven by technology becoming more affordable and easier to programme at a time when labour costs are increasing in developed and emerging markets and working populations shrink, particularly in major economies like China and Japan.

Until recently, the application of robotics in industrial automation has been largely confined to the auto and aerospace sectors. However, technological advances have given rise to significant growth potential in new markets such as semiconductor testing, general manufacturing, assembly and the food and beverage sector. 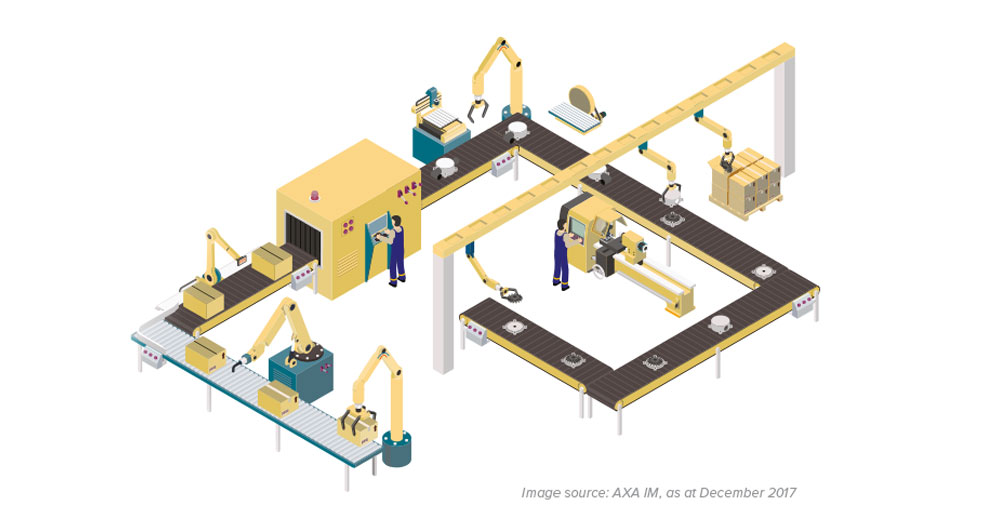 Furthermore, the development of advanced sensors and microprocessors over the past decade has facilitated the rise of collaborative robots – widely referred to as ‘co-bots’ – which are able to work alongside humans.

Co-bots are generally cheaper than traditional robots, with prices ranging from US$25,000 to US$45,000 compared to traditional factory floor robots which have price tags of at least US$100,000, according to manufacturing and supply chain analysts Manucore.

Sales of co-bots are projected by Teradyne to rise by 50% a year between now and 2020, making them the fastest growing sector of the global industrial robotics market.

Motoring ahead
The auto industry is increasingly being driven forward by the growing amount of electronics and technologies integrated within vehicules – a development which has the potential to make motoring safer.

The advent of driverless cars raises the prospect of greater mobility opportunities for elderly and disabled people who currently are unable to operate a vehicle, as well as freeing up time for current drivers, thereby raising productivity levels.

With design and production cycles stretching up to a decade, there is considerable visibility on the future revenue growth for component suppliers, providing investment potential not only in the car industry but also in automated vehicles used in the mining and agriculture sectors.

Healthy outlook
Robots are also shaping lives via their application in the healthcare industry, and are increasingly being used in surgical procedures. The AXA IM Robotech strategy also focuses on those two key areas: the expanding field of robotic surgery and the capturing of data to drive better patient outcomes.

The market for robotic surgery is not only large but continues to grow rapidly. While it is currently focussed on hernia and colorectal procedures, robotic surgery is expected to be extended to general surgery as new techniques are developed.

The benefits for patients include reduced scarring from smaller incisions, lower infection rates because of a cleaner surgical environment, and the potential for improved procedural precision compared with human-led surgery.

Intuitive Surgical, the global leader in robotic surgery, carried out more than 750,000 procedures in 2016 and predicts a growth in business of 14% to 15% a year.

The increasing availability and connectivity of data, meanwhile, allows for the continuous remote monitoring of a patient’s condition, allowing for the early detection and treatment of any serious conditions and potentially saving lives.

Long-term vision
With its Robotech strategy, AXA IM focuses on quality companies exposed to the structurally growing area of robotics and automation. It invests across the value chain of equipment manufacturers, component suppliers, and software companies.

These companies are typically leaders in their field with proven track records of investing in research and development to maintain their market positions and to remain at the cutting edge of robotics technology.

AXA IM takes a long-term investment approach in analysing companies and their outlook, typically covering a three to five-year span. This translates into a relatively low turnover strategy of 20% to 30% per annum.

“Our investment style involves spending a lot of time meeting management teams, both of the companies we are already invested in and where we see potential investment opportunities,” says AXA IM’s Riley. “We round this out by meeting customers, competitors, and suppliers to these companies to get a full picture of the industry in which they operate.

“In addition, we visit factories where these technologies are deployed and attend robotics and automation shows which give us the opportunity to view products first hand, which we believe helps us better understand the products and their future potential.”

Strategic investing
The Robotech strategy has benefited particularly from a few sectors including factory automation, semiconductor and industrial software.

AXA IM also invests in companies that sell microchips used in automotive and industrial applications. Main customers for these microchips were previously smartphone, PC, and television manufacturers, but they are increasingly being used in factories and cars.

“The more intelligence that goes into factories, machines, or processes, the greater the potential productivity gains for companies,” says Riley, pointing to a raft of benefits including the ability to monitor and manage inventory in real time, create 3D simulations of products and processes, and reduce waste costs.

Meanwhile, as the technology of robotics expands into more areas of industry and consumer electronics, the outlook for the sector in the years to come is bright as cutting-edge innovation opens up a new world of possibilities.

“After a very strong 2017 for the robotics and automation sector, we see this strong demand continuing into 2018 and beyond,” says Riley. “This is driven by continued technological innovations, but most importantly the broadening of the adoption of automation equipment into new industries.”

1Source: International Federation of Robotics (IFR), as at December 2017.

This is for information purposes only and does not constitute on the part of AXA Investment Managers or its affiliated companies an offer to buy or sell any investments, products or services and should not be considered as a solicitation or as investment advice.

The content herein may not be suitable for retail clients. No financial decisions should be made on the basis of the information provided.

This document has been prepared and issued for institutional/professional investors only, and not intended for general circulation.They are strictly confidential, and must not be reproduced, circulated, distributed, redistributed or otherwise used, in whole or in part, in any way without the prior written consent of AXA IM Asia. They are not intended for distribution to any persons or in any jurisdictions for which it is prohibited.

Such information may be subject to change without notice. The data contained herein, including but not limited to any backtesting, simulated performance history, scenario analysis and investment guidelines, are based on a number of key assumptions and inputs, and are presented for indicative and/or illustrative purposes only.

The information contained in this document is not an indication whatsoever of possible future performance and must be considered on this basis. Information herein may be obtained from sources believed to be reliable. AXA IM Asia has reasonable belief that such information is accurate, complete and up-to-date. Any views, opinions or recommendations (if any) that may be contained in such information, unless otherwise stated, do not reflect or constitute views, opinions or recommendations of AXA IM Asia.

This document has been prepared without taking into account the specific personal circumstances, investment objectives, financial situation or particular needs of any particular person. Nothing contained within this document shall constitute an offer to enter into, or a term or condition of, any business, trade, contract or agreement with the recipient or any other party.

This document shall not be deemed to constitute investment, tax or legal advice, or an offer for sale or solicitation to invest in any particular fund. If you are unsure about the meaning of any information contained in this document, please consult your financial or other professional advisers. The data, projections, forecasts, anticipations, hypothesis and/or opinions herein are subjective, and are not necessarily used or followed by AXA IM Asia or its affiliates who may act based on their own opinions and as independent departments within the organization.

Investment involves risks. You should be aware that investments may increase or decrease in value and that past performance is no guarantee of future returns, you may not get back the amount originally invested. Investors should not make any investment decision based on this material alone.