This is a sponsored article from Premia Partners


A recent study released by Boston Consulting Group made a startling finding: two years ago, China quietly surpassed the US in terms of spending on the later stage R&D spending or “development” R&D – which is aimed at turning discoveries into commercial products, and at its current rate of spending, China will invest up to twice as much as the US – or $658 billion – by 2018 into late-stage research. Indeed, for the past decade, “development” R&D in China has been growing at 20% a year versus 5% per year in the US, although the US is still the global leader in “basic and applied” R&D, which is aimed at making early discoveries and further refining them. What’s more, there are now 160 Chinese firms in the global top 1,400 for general R&D spending compared to 54 in 2011 and just 8 in 2006, based on the latest report published by the European Commission. 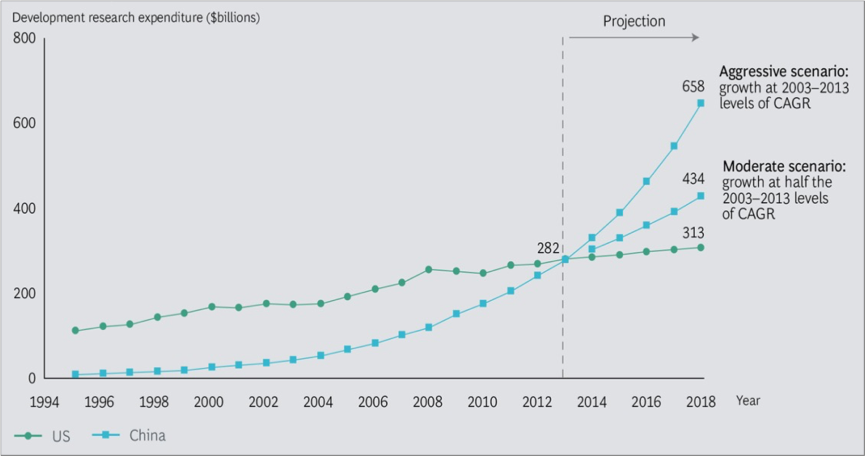 China is taking a shortcut in R&D investment to catch up with leading countries in advancing technologies by taking innovative ideas and turning them into commercial products. The burgeoning commercial drone market is a prime example of the shift. The US military developed drone technology throughout the 20th Century for reconnaissance and other purposes, adding microchips for better wireless control and longer-lasting batteries. Da-Jiang Innovations (DJI), a technology company based in Shenzhen, has since refined unmanned vehicles to better avoid obstacles and has become the world’s leader in the civilian-drone and aerial imaging technology industry in the process, accounting for 85% of the global consumer drone market.

Monitoring the patents filed and granted may be another way to measure innovation. The latest data from the China Statistical Yearbook 2016 shows that the number of patent applications surged from 1.63 million in 2011 to 2.80 million in 2015, and the number of patent grants grew from 960,000 to 1.72 million within the same period. This trend is also supported by data from World Intellectual Property Organization (WIPO). Some analysts, however, suggest that this data only tells one side of the story – China is quickly producing many new patents, but they are not necessarily of high quality. In this sense, ‘patents filed and granted abroad’ may be a better yardstick. By filing in a foreign country, non-resident patent applicants can defend their intellectual rights in foreign countries with the full protection of that country’s law. Due to the costs involved in filing and protecting patents in another country, patent owners do not do so if they expect that their patents will not suffer any real damage abroad. Conversely, the greater the chances that their patent will have wide ranging applications, the more willing an owner will be to apply for a patent abroad.

China experienced an exceptional rate of development from 2000 to 2015 – the number of patents filed abroad in 2015 was close to 40 times those filed in 2000, and the number of patents granted abroad grew more than 50 times – although there remains a large gap between the US and China on this measure. At the individual corporate level, ZTE Corp, the A-share listed in Shenzhen, and Huawei Technologies, a private Chinese company, took the top two spots and led the league in international patent applications filed, followed by Qualcomm Inc.

Looking into future, China would appear to have a bright outlook in innovation. China has outstripped both the US and Europe in graduate numbers and, as of 2016, it was building the equivalent of nearly one university per week. STEM (Science, Technology, Engineering and Mathematics) graduates are today a vital cog in the wheel of global prosperity and, unsurprisingly, China is leading the way. The World Economic Forum reported that China had 4.7 million recent STEM graduates in 2016 while the US had 568,000. The difference is partly a function of population, but it also reflects a greater interest in the sciences. 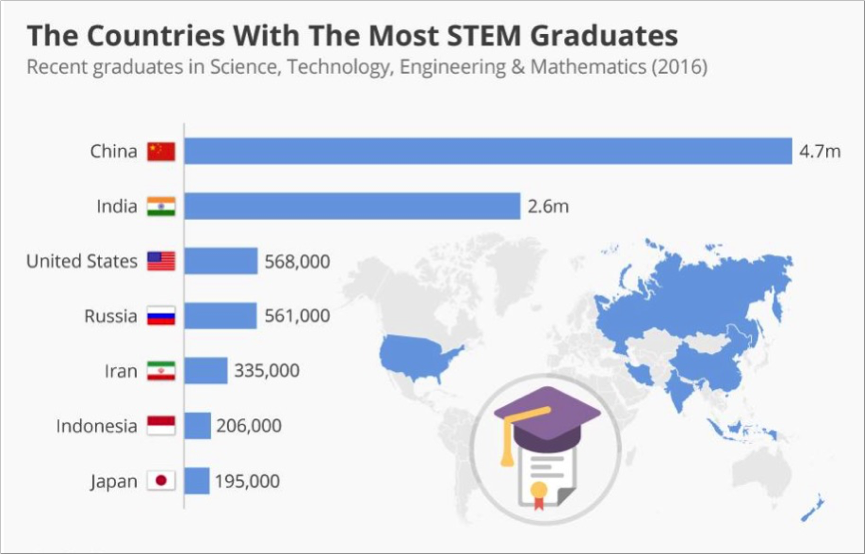 It is difficult to imagine that innovation can be successful without government support, whether directly via funding and subsidies, or indirectly through tax reductions and flexible policies.

Taking AI as an example, China’s State Council issued the “Next Generation AI Development Plan”, which outlines an ambitious agenda to become world-leading in AI. The plan is to give funds to AI-related projects, such as the China Academy of Science (CAS) Institute of Automation, a Beijing consortium of companies and universities. CAS stated that China’s AI industry increased by 43.3% YoY in 2016, surpassing RMB 10 billion (or USD 1.47 billion), and is expected to reach RMB 15.2 billion and RMB 34.4 billion in 2017 and 2019, respectively. The target is to exceed RMB 150 billion in 2020, RMB 400 billion in 2025, and RMB 1 trillion on 2030, thereby cementing China as the world leader in the space. Indeed, a few Chinese companies such as Baidu and Tencent have even established AI research centers in the US. 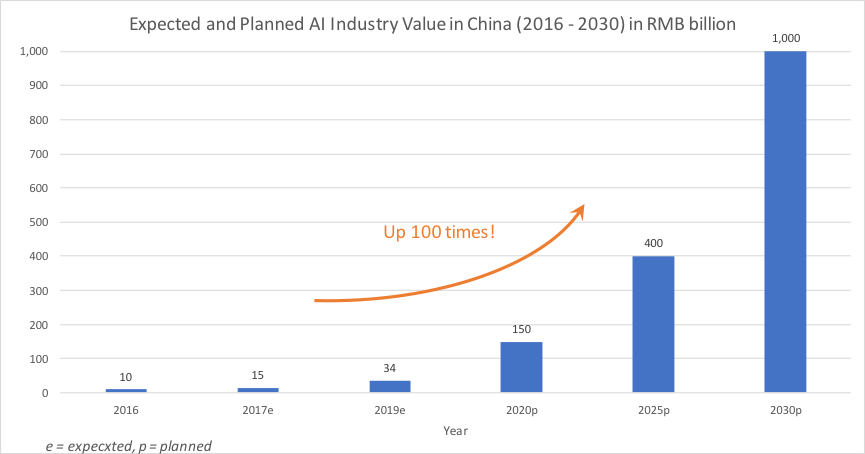 During China’s 19th Party Congress last October, President Xi placed innovation at the centre of the national strategy. He called for building China into a “science and technology superpower”, pursuing a strategy of innovation-driven development, and sought to leverage the potential of the internet, big data and artificial intelligence. A joint report issued by the National Center for Science and Technology Evaluation and Clarivate Analytics said China’s expenditure on research and development accounted for 1.4% of GDP in 2006, increasing to 2.1% in 2016. Indeed, compared with its regional neighbours, China is quite generous about supporting innovation industries. Among all 3,500 A-share listed companies, the effective tax rate of three knowledge-intensive sectors—consumer discretionary (auto, media and household appliance companies), healthcare, and information technology—is much lower than in other sectors, and direct government subsidies to these sectors are also higher than average.

Looking at the structure of the China A-share market, we do see its changes being reflected gradually. For example, the current sector breakdown already looks quite different from a decade ago. Low-tech and commodity-type industries including material, utilities, and energy accounted for a larger market share back then at 31.1% versus 12.2% today, while new economy sectors including consumer discretionary, healthcare, and information technology increased their market share 2.5 times, from 10.3% to 25.2%. 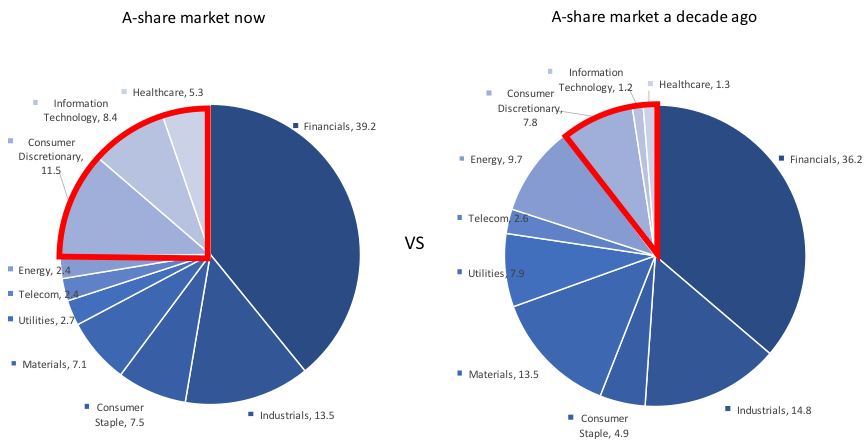 Changes in the top ten A-shares, ranked by the free-float market capitalisation, also provide food for thought. A decade ago, eight of the top ten spots were filled by financial companies. Today, financials are account for six spots, with consumer staples and discretionary occupying the remaining four. Going forward, we expect to see further diversification by industry.

Drawing on the above observations, investors should take with them three key messages: (1) investors should recognise that China is putting great efforts into driving innovation, transforming the economy from low-cost manufacturing to highly valued – added industrials and services. (2) the outlook for innovation development in China looks promising, given the sheer number of entrepreneurs with capital, supportive government policies, and abundant talent pools; (3) investors are able to enjoy the benefits of an innovative China by investing in China A-shares, for the fact that the market’s overall structure now better reflect the new economy. The market also contains a number of hidden gems that have yet to be discovered by international money managers.

And don’t forget, alongside this increase in innovation wealth in China continues to accumulate at a rapid pace. Currently there are 609 billionaires in China compared with 552 in the US.

This is a sponsored article from Premia Partners