Much of the conversation surrounding the future of banking focuses on technologies such as cryptocurrencies and blockchain. However, there is a central problem to this discussion: Neither of these emerging disruptive forces is anywhere near ready to take centre stage.

But another transformative technology is already exerting an extraordinary impact on our daily lives. They are being used by billions of people and look set to become increasingly popular: Digital wallets.

Digital wallets allow for payments of almost any size – online or when vendors and customers are in the same place – without the need for bank cards or conventional accounts.

A typical day for a digital wallet user may involve paying your subway fare with an Apple Watch and then enjoying a game on your smart phone downloaded with Amazon Pay. On your way home, you might then tip a busker by scanning a QR code from your phone before you pre-order and skip the line at Starbucks by paying through the coffee chain’s own wallet.

The attractions are obvious, particularly where security is concerned. Cash and cards can fall into the wrong hands. When they do, putting things right can be time-consuming and troublesome. Digital wallet transactions are encrypted and/or needed biometric authentication while the phones they are installed on offer an additional layer of security.

It is small wonder, then, that the value of transactions through digital wallets is expected to rise by 80% to more than $9 trillion by 2024 and to be used by nearly four billion people – more than half the world’s current population1.

Who is leading the way in the global switch to digital wallets? Players tend to fall into one of four broad categories:

Conventional banks
Established banks are eager to develop new revenue streams as traditional ones decline. By enabling digital wallets, Nexi in Italy transformed itself from a traditional payment processor owned by some of the country’s oldest banks to a standalone technology-leading player. Floated in April 2019, the company is now valued at around €6 billion2.

Start-ups
With venture capital abundant for disruptors, start-ups are playing a key role in enabling digital wallets. Adyen, a Dutch company which provides solutions for payment platforms, has grown from a start-up a little more than a decade ago to a listed company worth more than €18 billion2.

Technology giants
All the big players are getting involved as Apple, Samsung, Google, and Amazon diversify from their core competencies of phones, search engines, and online shopping, and tap into the huge well of information they have on their legions of loyal users. Apple currently has the dominant market share among these players. Apple Pay was first to the market in 2014 and by 2018 had an estimated 140 million users worldwide3. 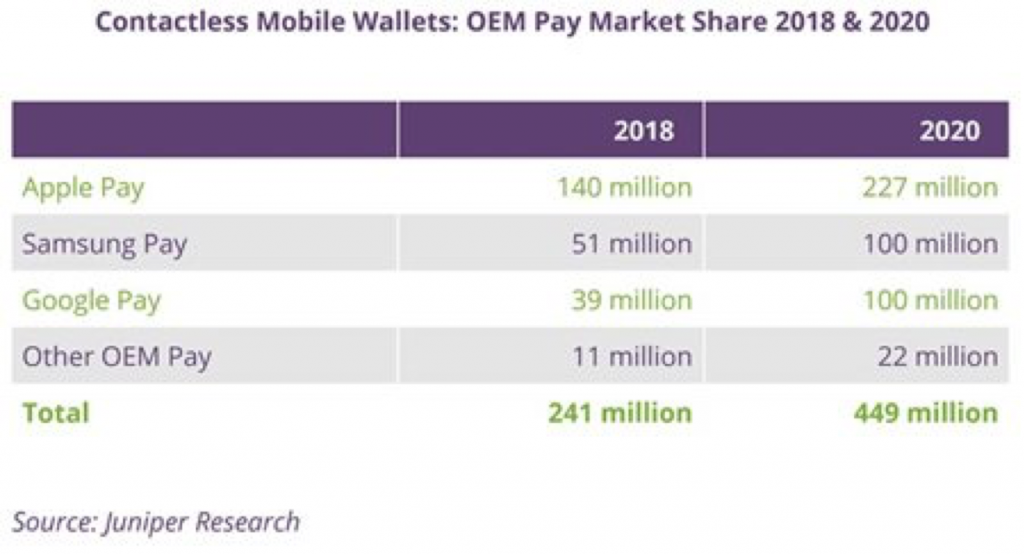 Chinese companies
China is the spiritual home of digital wallets. Alipay and WeChat have an estimated one billion users between them1. Around 81% of consumers in China use mobile payments and between them they spent around $41 trillion this way in 2018. The chart below shows just how explosive the growth in Chinese mobile payments has been over the last five years4,5.

With their vast domestic platforms and financial muscle – in particular Alipay which is part of the US$475 billion2 Alibaba commerce and technology group – the global direction of travel for digital wallets could well be driven from China. 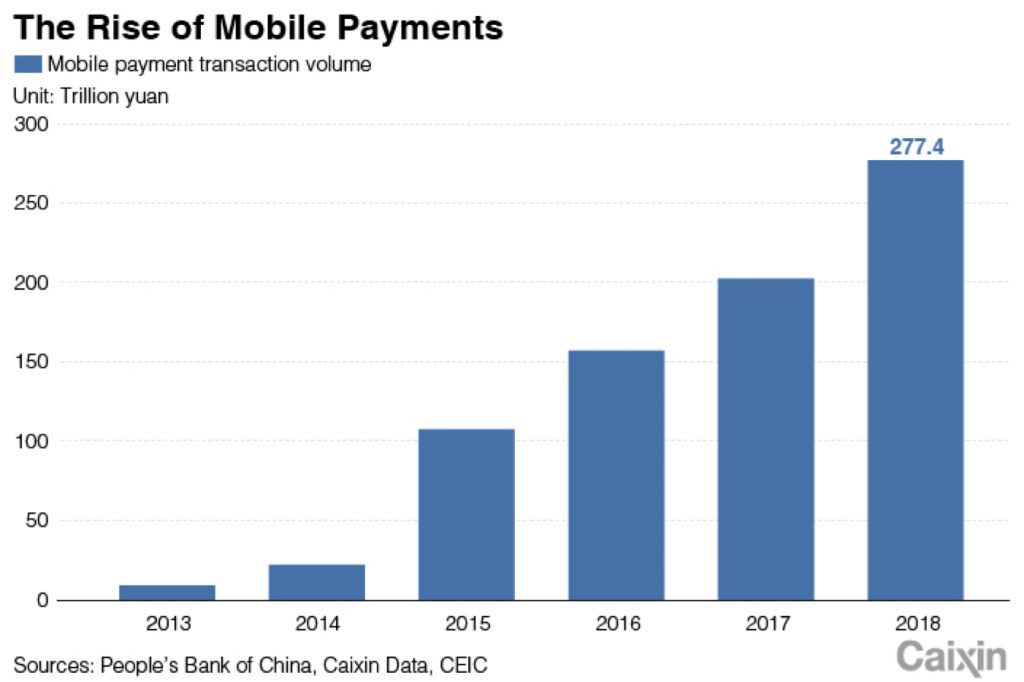 Alipay has already spread its influence across Asia and is catering to the ever-increasing number of Chinese tourists travelling to Europe. A sponsorship deal with the UEFA football championships in 2020 and 2024 said to be worth around US$200 million will bring the brand to a much wider demographic.

What next?
The years ahead are likely to be ones of perpetual motion as players from the four categories seek to establish dominant positions with merger and acquisition activity continuing to grow. There will also be a push to make wallets more interoperable, both with each other and across national borders.

Perhaps the biggest unknown factor in the growth of digital wallets relates to the potential role of cryptocurrencies, particularly Facebook’s Libra currency which was announced in June 2019 with great fanfare and considerable controversy surrounding its regulation and privacy implications.

The Libra project includes the Calibra wallet, which could be embedded into the social media giant’s hugely popular WhatsApp and Facebook Messenger chat apps.

WhatsApp and Facebook Messenger have almost three billion users between them, so their impact on digital wallet use could be immense. But it remains far from clear if Calibra will ever see the light of day.