With upside earning surprises and continued policy stimulus, Credit Suisse Private Banking expects another 7% upside for global equities over the next 12 months.

Suresh Tantia, senior investment strategist at the bank’s APAC CIO office, told Asian Private Banker that the recent equity markets recovery is a reflection of the fact that the recent fiscal and monetary policy measures have mitigated some negative effects from COVID-19 on the economy. Improved earnings expectations have been helped too by the “broadly better than feared” 2Q20 earnings and “quicker than anticipated” economy opening.

“Investment alternatives to equities — such as low risk bonds — offer a very unattractive return potential, and central bank guidance suggests that this will not change in the near-term,” he said.

“As such we expect attractive returns from equities and foresee that equity markets will continue to grind higher. We currently expect global equities (ACWI) to be approximately 7% higher in the next 12 months.”

The most preferred segments remain growth sectors such as healthcare and technology, which the bank believes will continue to produce attractive earnings growth.

“Further, we like the defensiveness and robustness of the Swiss equity market, which adds stability,” said the bank. It also favours some German equities that benefit from a strong fiscal situation and support, are less affected by the crisis but have a high sensitivity to China.

“In emerging markets (EMs), we have a focus on EM Asia, specifically markets such as China and Taiwan.”

China has been first-in first-out of the lockdown with relatively swift control of the virus. This, coupled with adequate policy support has resulted in a strong economic recovery, with many sectors registering positive YoY growth. “More importantly, Chinese equities offer high exposure to internet names which will continue to drive the market higher,” Tantia said.

“Similarly, we expect continued outperformance of tech-heavy Taiwan equities.” He noted that structural drivers — such as 5G, cloud, AI demand — provide strong growth visibility. On the income side, Taiwan equities offer a healthy dividend yield of 3.5% — which is attractive in this low interest rate environment.

It was a matter of when, not if, and that moment came on Thursday last week when Fed chair Jay Powell said the central bank would adopt a more flexible approach to inflation management, essentially allowing inflation to run above 2% following periods of weakness.

The announcement was one for the history books, according to Chetan Ahya, chief economist and global head of economics at Morgan Stanley. It also reinforced Ahya’s long-held contrarian thesis that inflation will indeed re-emerge in this cycle, due in part to what he expects will be a V-shaped recovery from the Great COVID-19 Recession (GCR), as Morgan Stanley calls it, and the forceful and coordinated nature of policymakers’ response.

It was back in May when Ahya and his team outlined, in considerable detail, their case for the return of inflation — citing “a tectonic shift in policy that is preparing the ground for renewed inflation” and whose triggers preceded the GCR.

“[Falling] natural interest rates … and the absence of active fiscal policy had weakened inflation expectations, despite the lengthy expansion. The interplay of trade, tech and titans was already working in the background, dampening inflation dynamics but also contributing to the fall in wages’ share of GDP and the rise of income inequality. Discontent had risen, intensifying pressure on policy-makers to address these issues,” Ahya wrote at the time.

What the GCR has done is further impel policymakers to address those issues via a massive, rapid and – crucially – coordinated fiscal response and monetary accommodation, setting the scene for a “shorter but sharper” recession that says as much about the nature of the shock as it does about the policy response itself.

“Now, if it were an endogenous shock, one would have seen a big pickup in leverage before the shock occurred, and it is that misallocation that causes the growth slowdown. But this time, aggregate private leverage has not picked up in the US — there has been some pickup in corporate leverage but not in household leverage — which means you will see less deleveraging pressures post-recovery and not so much risk aversion as the shock is unfolding.”

Japanese prime minister Shinzo Abe’s decision to step down may inject short-term uncertainties into the country’s economy and financial markets, but his economic policies are expected to be continued under his successor.

On 28 August, Abe announced his resignation, citing ill health. He will remain in office until a successor is picked within his party.

Economists from across the board largely agree that Abe’s resignation is unlikely be a game-changer, either for Japan’s economy or Japanese assets.

Abenomics here to stay
During his tenure and under “Abenomics”, the Bank of Japan (BoJ) enacted bold quantitative easing and ended the country’s age-long deflation.

“Abenomics has been a success overall, bringing more benefits than costs to the Japanese economy and society at large,” commented Chen Dong, senior Asia economist, Pictet Wealth Management. “There is no reason for Abe’s successor — from the same ruling party — to deviate from these established policy choices, at least in the short term.”

Chen believed BoJ’s policy stance carries more importance for the economy and the financial markets than who occupies the PM role. As long as the BoJ’s stance on supporting equities remains unchanged — through the purchase of Japanese ETFs, for instance — Japanese equities will stay unaffected by the leadership change.

As for the yen, Chen identified attractive long-term real rates and a decrease in foreign portfolio investment by Japanese investors to be supportive factors for the currency. The yen will be less sensitive monetary policy, which is already “at the limit of what it can do”.

Dan Carter, fund manager, Japanese equities, Jupiter Asset Management, admitted that the timing of Abe’s resignation is unfortunate on the back of COVID-19 and an incoming US election, adding to political uncertainty. But he did not foresee a major change in the administration’s political agenda or major disruptions from the move: “Abe has long since ceased to be the totem of Japanese economic and market renaissance that he once was, so his departure is considerably less troubling than it would have been five years ago.”

After periods of persistent below-target inflation, the Fed says it will aim to “achieve inflation moderately above 2% for some time.” This new framework is opening the door for the USD to depreciate further, according to UBS GWM.

“The Fed has never lowered rates below the zero bound and between 2015 and 2019 even hiked rates as the economy improved,” the bank said, adding that this gave the USD a rather exclusive role as a safe haven and a relatively high yielding currency.

“But the Fed will now likely wait even longer into the recovery before it starts its hiking cycle again.”

UBS believes EUR/USD to continue to trade within the range between 1.15 to 1.20, with a potential of trending even higher if European and global growth recovery is on firmer footing.

On the contrary, gold will continue to be supported by negative real rates and a weaker dollar, the bank said, pointing out that the precious metal is already one of the top-performing assets of 2020, up around 29%.

“Since gold does not provide a yield, a negative real interest rate eliminates the opportunity cost of holding the metal relative to cash or fixed income,” it said.

“We think gold will continue to be supported by ultra-easy monetary policy, a weak US dollar, and policy uncertainty ahead of the US election.”

Despite the market concern over an elevated risk of a short term pullback in 3Q20, Standard Chartered says the bank will continue to buy on dips.

“Low and falling real bond yields (and broadening policy stimulus) create a strong tailwind for equities and corporate/EM bonds over 6-12 months, in our assessment,” the bank said.

“Therefore, our preferred strategy remains unchanged,” it said, adding that the bank will continue to use any pullbacks to add to risk exposure, while taking advantage of any rebound in volatility to generate income.

On investment style, the bank maintains a preference for growth, believing it’s not time yet to shift exposure to value.

“Based on our recent re-assessment of the fundamentals underpinning value-based investment strategies for both US and global equities, we conclude that it is not yet time to rotate into this investment style on a 12-month investment horizon,” it said.

“While some of the key drivers for value-style investing have improved recently, uncertainty around them remains high, suggesting we may need stronger evidence of a sustainable improvement before shifting our preferences.” 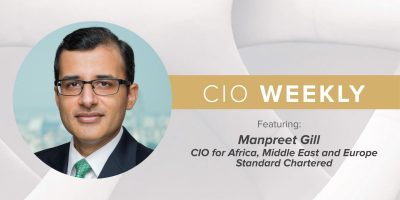 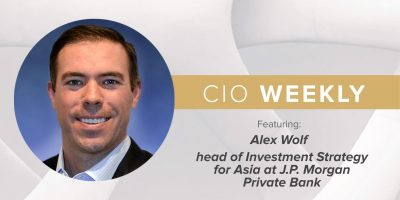 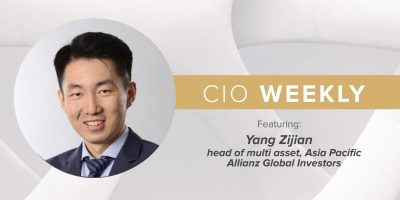 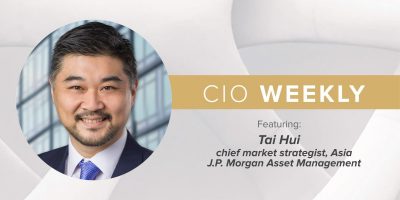 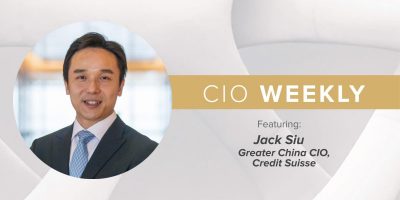 CIO Weekly – Rebuild positions in A-shares as the worst in China is now behind us: Jean-Louis Nakamura of Lombard Odier 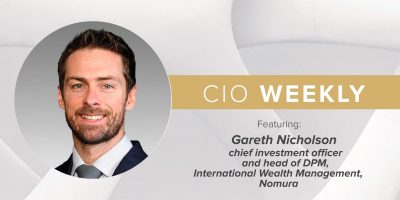 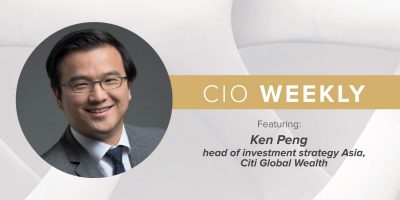 CIO Weekly – China’s economy to get worse before it gets better: Ken Peng of Citi Global Wealth 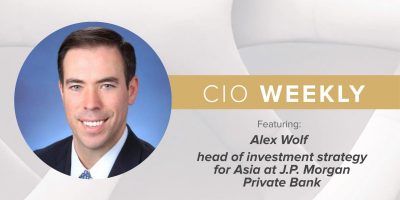 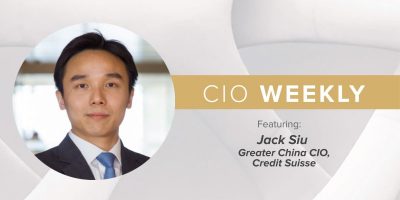 CIO Weekly – Investors should not “jump the gun” on Chinese equities: Jack Siu of Credit Suisse 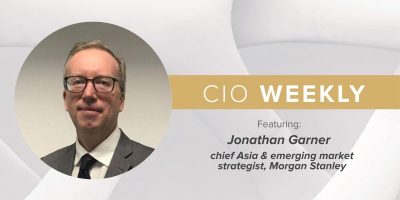 CIO Weekly – Earnings growth to decelerate in 2022 and beyond for North Asia markets: Jonathan Garner of Morgan Stanley